The eighth anomaly is curious, and involves the disparity between Farrant's attitude toward me and Anthony Hill. Many people have mentioned it to me. None can understand it. I shall now attempt to make some sense of the puzzle, but it boils down to a simple deduction in the end. 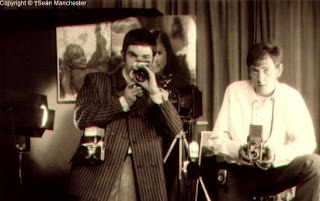 Anthony worked part-time, mostly in the darkroom, at the north London photographic studio. In the mornings he worked as a milkman and then came to me late morning or after lunch. He had previous darkroom experience at studios in Kilburn and Oxford Street, Thus, in the early 1960s, I became acquainted with Anthony (at Kiburn there had been another member of staff with the same first name, so his middle name was used in these circles, and it stuck). Outside of them he was called Tony. However, he took a fancy to a barmaid in The Woodman on Archway Road, and started seeing her despite the fact that both were married. This went on for some months until one early evening he turned up on my doorstep with her and her infant, and asked to be accommodated for the night. My gut reaction was to not facilitate them, as I felt compromised. Hence so they took off into the evening sunset. I didn't see Anthony for some time after that. They apparently went to live in the west country for about six months before each returned to the marital home of their respective spouses. Needless to say, Anthony Hill did not return to the studio. An important fact is that the girl he had run off with and apparently made pregnant in the interim was Mary Farrant. She already had a small child, Jamie, born in November 1967, and that might have contributed to their return. Her husband, a man called David Farrant, was soon to be made bankrupt and evicted from the marital home. She had her second child, Danny, in Highgate, and then repaired to he parents' home in Southampton. Farrant was now destitute and in need of somewhere to sleep. Anthony offered him his small coal bunker, part of a communal cellar, and he readily accepted, being permitted to climb the stairs from the cellar to the kitchen to make himself a cup of tea, but that was all. Farrant's friend, Nava Grunberg, would visit him in the coal bunker and that is when the "ghost" story was dreamt up. I learned all this much later. 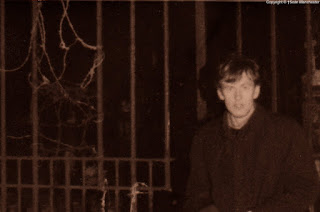 Anthony, pictured above at Highgate Cemetery's north gate, collaborated in the "ghost" story shenanigans, but soon tired of them. However, not before photographing David Farrant in the cemetery's catacombs in 1970. These photographs were intended for the newspapers, so, in an attempt to tidy up the normally scruffy Farrant, he loaned him his jacket. It was identical to a double-breasted jacket I possessed, save mine was a size larger. They were purchased from a fashionable shop in Shaftesbury Avenue circa 1965. Farrant posed for pictures in the catacombs wearing this jacket. The ironed trousers were also provided by Anthony who, of course, took all the photographs. 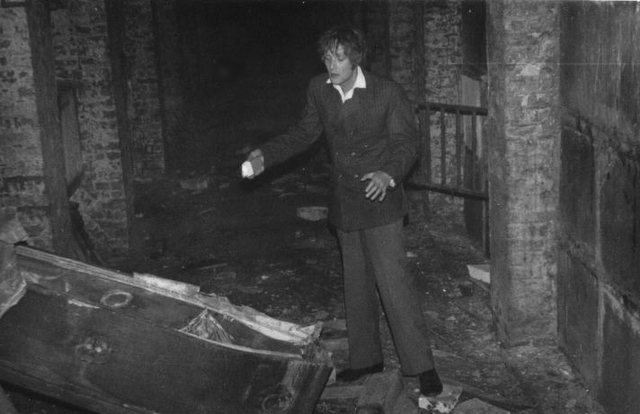 "The most damaging evidence against Farrant was the production of several photographs of coffins containing bodies in the mausoleums at Highgate. One in which he is seen peering into a damaged coffin was first published by the Islington Gazette on 29 Seprember 1972. It appeared again in TitBits magazine the following year. It shows Farrant in a borrowed double-breasted jacket, shining his torch on symbols engraved into the lead of an open coffin. Farrant refused to name the photogragher at his trial, but in later years insisted it was the ubiquitous 'Hutchinson' with whom he had lost all contact."

This photograph "was used in evidence against him during the trial relating to damaging a burial memorial, breaking open catacombs and interfering with a corpse."  (The Highgate Vampire, p. 112).

It goes without saying that had the man Farrant was naming in the press as "Hutchinson" (aka Tony) come forward, Farrant would have served half his sentence. But he did not come forward, and Farrant did not reveal Anthony's identity or address. What inhibited him? Was it something Anthony knew that Farrant feared having revealed? It could be several things, but I was always struck by how friendly Farrant appeared toward him in the aftermath of being first, cuckolded and, then, allowed to stew in a jail cell for longer than need be because he would not subpoena Anthony. He had subpoenaed plenty of other reluctant witnesses for the defence, including his wife, Mary, who actually mentioned seeing the incriminating photographs in the hands of someone called Tony, but pleaded ignorance as to how he had them. Mary Farrant would have known full well that Anthony Hill took them!

Hence the eighth anomaly, which suggests Anthony had something on Farrant. What could it have been? Anthony knew James Bradish as a mutual drinking acquaintance of Farrant's, mostly in the Prince of Wales, Highgate Village. Before she ran off with Anthony, Mary had reported to her husband that Bradish had made passes at her when she was alone with him at the marital flat. Farrant resolved to get his own back, and, whilst putting on a friendly facade in the interim, came up with the idea of making black magic telephone threats to their household in Barnet. Gillian Bradish answered the telephone and received a threatening call. Anthony was still close enough to Farrant at this time to know all the minutiae. Farrant managed to persuade Bradish that the caller was me, however, even though it transpired that the Bradishes telephone number was ex-directory, and I did not know the them. It all became rather ugly and James Bradish ended up with a criminal conviction for assault, which was job done as far as Farrant was concerned. Farrant was unhappy with me because I refused to allow my name to be put to some cock and bull story he was proffering to the court, having been arrested in Highgate Cemetery on 17 August 1970, and subsequently being held on remand at Brixton Prison. Thus I became a second victim of the "black magic telephone threat." I believe to this day that Anthony had something that would have proved beyond all doubt who did it.

I have witnessed down the years a relationship where Farrant never publicly said anything too bad about Anthony, and invariably used a nickname that nobody knew apart from half a dozen others.

I, on the other hand, have been lambasted for doing nothing more than holding to being true to an honourable code. When his wife and her lover wanted me to help them in their endeavour, I refused.

Yet both father and son (the son being Jamie) waged vendettas against me in what can only be described as a threatening manner. Anthony, on the other hand, who could have reduced Farrant's prison sentence by at least two years if he had chosen to do so, was completely allowed off the hook.

It has to wondered what it was that Anthony held over Farrant; indeed, was it the Bradish matter? 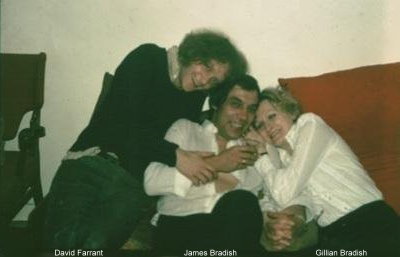 The eighth anomaly is curious, and involves the disparity between Farrant's attitude toward me and Anthony Hill. Many people have...