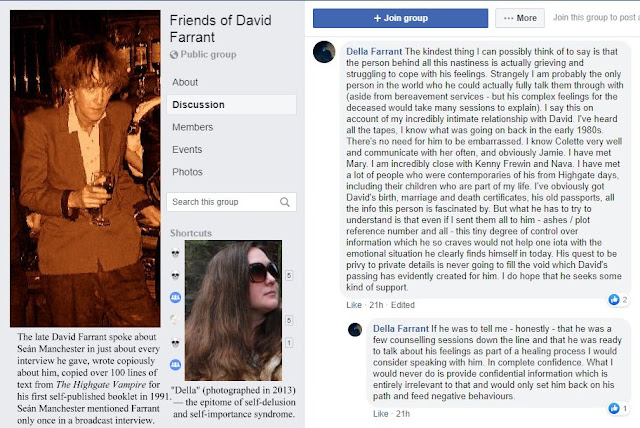 Nastiness is in the eye of the beholder. Aside from a small bunch of depraved characters whom Seán Manchester would not expect to act any differently toward him, precisely whom is "Della" talking about? How can she sincerely believe her own words to be true? Surely, it is all concocted for public consumption - the same public who might wonder why she isn't seeking bereavement counselling?

She suggests that she is the only person in the world whom Seán Manchester could talk to about "his complex feelings for the deceased," and that "a few counselling sessions down the line" she would consider speaking to him in person. She then makes some claims about David Farrant's friends, relatives and progeny - all without a scrap of evidence to back it up. Why should anyone not approach "Della" with extreme caution when she attributes "negative behaviours" to Seán Manchester while trying to take the high moral ground? Maybe we should remind ourselves (without regurgitating her talking mongoose called Gef which she believed she was being haunted by) of "Della," and some of the history behind her quixotic and deluded claims since emerging from out of the shadows in 2010?

When she first appeared on the internet as "Della Vallicrus" ten years ago, she adopted the persona of Christine Moloney, including Christine's curriculum vitae, lifestyle, wedding plans and wedding date. The lobsters, champagne and absinthe were all fantasy; as was the plush residence in Knightsbridge. "Della" lived in poorer circumstances than Farrant, and the nearest she got to lobster was a small pot of lobster fish paste. It was all delusional. Christine got married at Hallowe'en 2011; so, obviously, "Della" announced her "marriage" for the same day. No record of "Della's" marriage exists at the Public Records Office, which is hardly surprising. There is a record of Christine Moloney's marriage.

Seán Manchester "craves" nothing. He simply evinced a puzzlement at the lack of basic facts concerning someone he had once known, and, as a Christian, now forgives for all the harm caused to him, his friends and relatives over half a century. There are no "complex feelings for the deceased," only the same sadness he would show for anyone who had led such a life. She speaks of him seeking "some kind of support" when the one in desperate need of support is quite obviously her.

She rashly lists some people she boasts of knowing. Whether she does or not, let's look at them:

Mary - Farrant's first wife - was a Roman Catholic who was very opposed to all aspects of the occult.

Nava - helped to write hoax letters to the Ham & High in 1970. She took lots of illegal substances.

Kenny - wrote hoax letters, involved himself in concocted press stories, and was a violent ex-convict.

Jamie - executes a vendetta on his father's behalf, but ignored his father for forty-three years.

With the single exception of Mary, not the sort of people anyone would want to boast about knowing.

"Della" also claims to have "heard all the tapes." She could not have done. There are many reel to reel tapes of David Farrant that Seán Manchester possesses from as early as 1970. Few have ever been published. No matter how intimate she might claim her relationship to have been with Farrant between 2010 and 2019, she could not have known him anywhere near as well as Seán Manchester who was there at the beginning - before Farrant ludicrously began embellishing his claims, and spoke with abandoned candour to people not only within his own circle, but also, eventually, to Seán Manchester, who saw and experienced the real man before he became a projection of his imagined persona which, of course, his wife, Mary, failed to recognise as being true (while under oath in court).

Kenny Frewin is quite a bit older than Seán Manchester, and has never met or spoken with him outside of making violent threats toward him on the night of Hallowe'en 1976 at Highgate Wood where the press and public had assembled for an event. The police intervened. For "Della" to now suggest that "Kenny Frewin is offering his services" because "he feels that a good clearing of the air is long overdue" is nothing less than an unveiled and open threat of violence toward Seán Manchester. 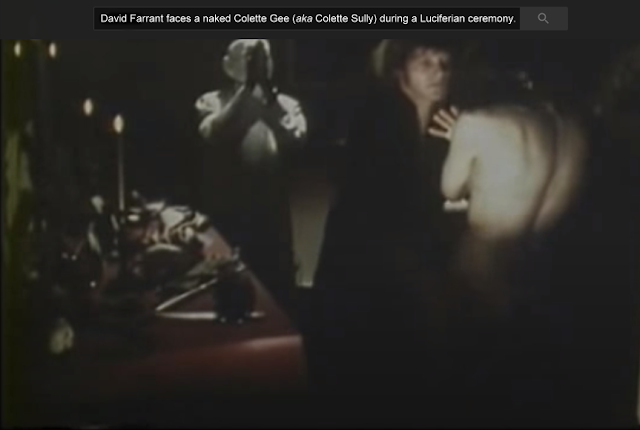 "Della" commented on the piece above on a Facebook group she has taken over from David Farrant (though she now claims the group was hers all along). The group is called Friends of David Farrant.

She claims that the image of Colette performing a naked Luciferian ceremony at Farrant's Muswell Hill home was posed for the cameras and was not real, but just a "representation." Now where have we heard that before? Perhaps when he appeared before BBC cameras on 15 October 1970 wielding a sharpened stake and Christian cross? He was being interviewed about his activities on the night he was arrested in August 1970. He said nothing about a "representation" at the time, but he did later on.

Even adding on years in the 1960s when, in fact, Seán Manchester was not acquainted with Farrant, "Della" calculates that they only had communication over ten years, eleven at most. She, on the other hand, is now insinuating that she knew Farrant before she originally claimed to have started seeking him out, and that they were in a relationship prior to that time. Such twaddle merely serves to confirm how deluded this woman really is. What she is really saying is that every word she utters is false.

For the record, Seán Manchester first met Farrant close to the end of February 1970, as recorded on the front page of the Hampstead & Highgate Express, 6 March 1970. The last time they met was at dusk in Highgate Wood on 24 January 1987, as revealed in a book he wrote in 1988. That is closer to two decades than one. This was a most crucial time to have known Farrant, especially in the 1970s.

Seán Manchester has not met Mary Farrant beyond her landing on his doorstep while holding Jamie who was a few months old. He did not speak to her. In fact, he has never spoken to her. He spoke to the person accompanying her. This was also the one and only occasion he met Jamie Farrant.

He has met Colette Farrant briefly, but they barely exchanged any words on each occasion they met.

He has seen Nava Grunberg on a couple of occasions in Highgate High Street, and merely said hello.

He has not met Kenny Frewin apart from being threatened by him. He does not know Frewin at all. 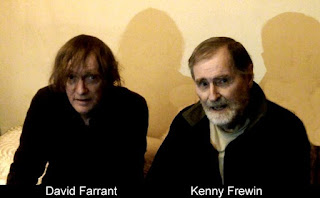 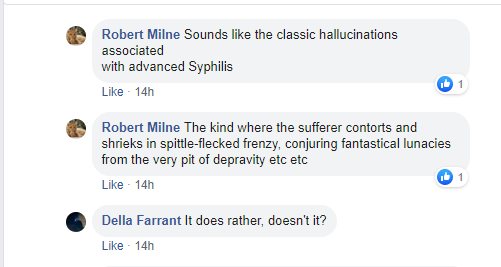 What utterly charming company "Della" keeps! The posts are all from the Friends of David Farrant group that she now claims to have co-founded. Let's take a little closer look to see what the truth is.

According to her own online statements from ten years ago, she had not started seeking out Farrant until 2010; so how on earth did she manage to found the Friends of David Farrant group in 2009? 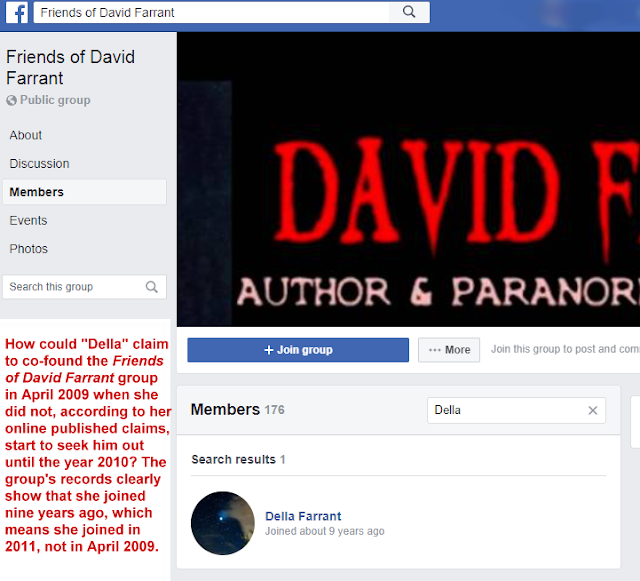 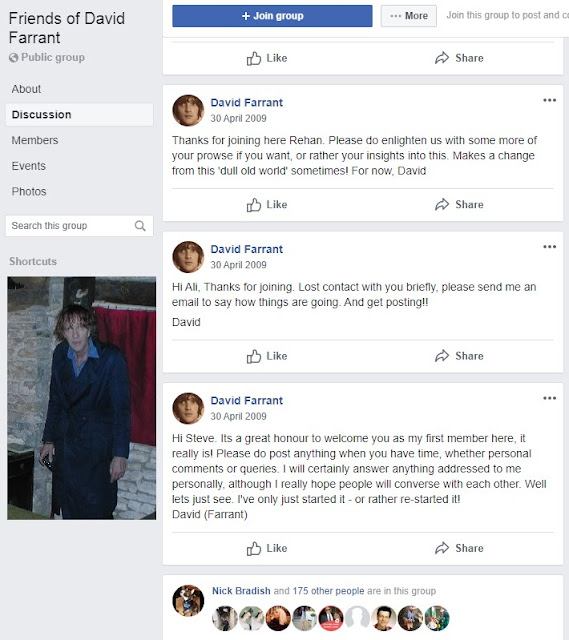 At this point in the proceedings, "Della" closed the Friends of David Farrant group to non-members. 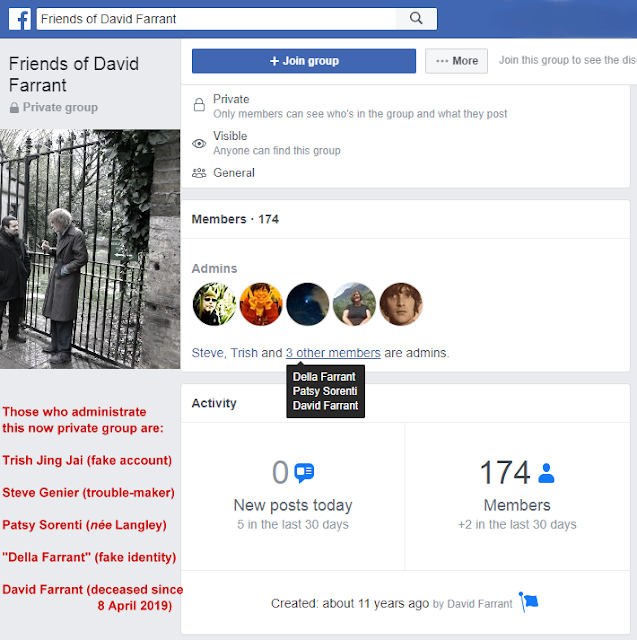 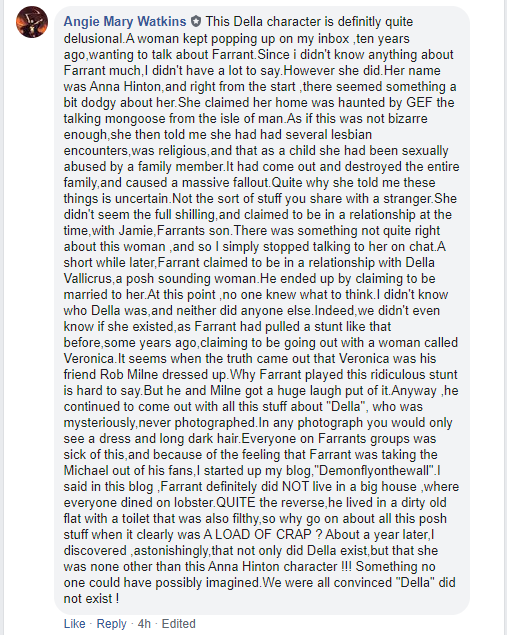 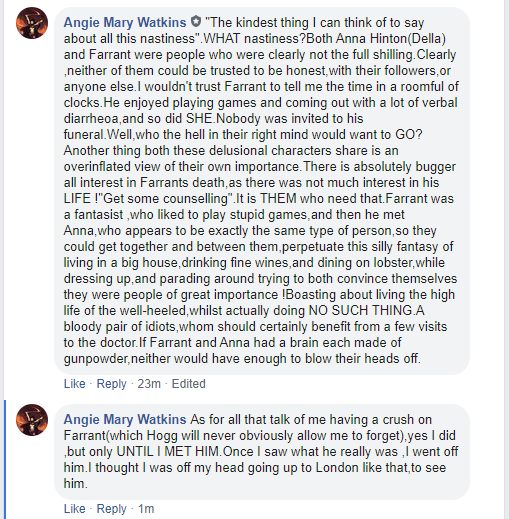 Nastiness is in the eye of the beholder. Aside from a small bunch of depraved characters whom Seán Manchester would not expect to act a...